Why DNA hydration is different from that of proteins

Why trehalose confers protection against urea-induced denaturation of proteins is investigated by Subrata Paul and Sandip Paul of the Indian Institute of Technology in Guwahati using MD simulations for a protein analogue (N-methyl acetamide, NMA) (JPCB 119, 9820; 2015 – paper here). They find that direct interactions are the key. NMA hydration water is displaced by hydrogen-bonded urea, but the addition of trehalose only modestly decreases the urea density close to the amide. Rather, trehalose molecules largely replace water molecules in the hydration shell (so that trehalose and urea bind to NMA simultaneously). For proteins this would reduce the ability of water to solvate exposed backbone in the denatured state.

Another structure-stabilizing osmolyte, trimethylamine N-oxide (TMAO), is studied by Yuki Nagata of the MPI for Polymer Research in Mainz and colleagues (JPCB 119, 10597; 2015 – paper here). Their ab initio simulations look at the effect of TMAO on water reorientational dynamics, and show that these are retarded significantly close to the TMAO’s oxygen atom due to its hydrogen bonding with water – a result not seen using a simpler force-field model that represents the oxygen as a single point charge. Since TMAO is generally excluded from protein surfaces, its stabilizing influence seems in this case to be an indirect effect, for which the authors say this interaction with water seems likely to be important. These conclusions are supported by the work of Gerhard Schwaab and colleagues at Bochum, who have used THz/FIR and Raman spectroscopy to look at the solvation dynamics of TMAO (L. Knake et al., JPCB 119, 13842; 2015 – paper here). They too find strong hydrogen bonding between TMAO and water, which supports an indirect mechanism for its biological effects.

How proteins denature in pure water as a result of low temperature or high/low pressure is still not entirely clear – in particular, are the mechanisms of these two processes essentially the same or distinct? That questions is addressed by Valentino Bianco and Giancarlo Franzese at the University of Barcelona using MC simulations of a coarse-grained protein model (represented as a self-avoiding hydrophobic or mixed hydrophobic/hydrophilic chain) with explicit water solvent (Phys. Rev. Lett. 115, 108101; 2015 – paper here). They argue that both denaturation processes involve a balance of free energies between hydration and bulk water. For cold denaturation, this balance favours the unfolded protein conformation for energetic reasons relating to the increasing stabilizing effect of water-water hydrogen bonds in the hydration shell. High-pressure denaturation, meanwhile, is driven by changes in local water density near the unfolded protein, giving a dominant PV contribution to the free-energy change of denaturation. And low-pressure denaturation is enthalpically driven, again by changes in the number of water-water hydrogen bonds in the hydration shell. In sum, the authors say, “For [all] these mechanisms is essential to take into account how the protein-water interactions affect the stability of the water-water HB and the water density in the hydration shell.”

A strategy for attacking antibiotic resistant bacterial pathogens that has been afforded increasing attention recently involves disabling not the mechanisms by which they synthesize key cellular components but those that contribute to virulence. One such target is a dehydratase enzyme DHQ1, present in several typical “superbugs”. Concepción González-Bello at the University of Santiago de Compostella and coworkers describe an inhibitor containing an ammonium group that binds to DHQ1 without relying on the reactive epoxide functionality of previous such drug candidates (C. González-Bello et al., JACS 137, 9333; 2015 – paper here). It binds to and covalently modifies the enzyme’s active site thanks to hydrogen-bonding to a single water molecule, while a second conserved water molecule participates in the reaction that leads to covalent modification.

Another water-assisted enzymatic mechanism is described by Ana-Nicoleta Bondar of the Free University of Berlin and colleagues. Using MD simulations, they look at the proton-transfer protein PsbO, a subunit of photosystem II, and find low-mobility water molecules close to its surface that form part of a water-carboxylate network that could facilitate proton transport (S. Lorch et al., JPCB 119, 12172; 2015 – paper here). Some of these waters might, they say, also assist the docking of PsbO into the PSII complex. 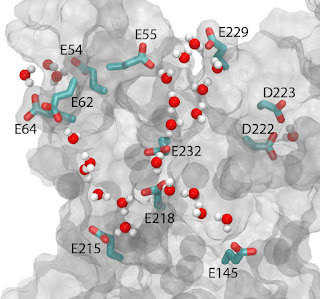 The water-carboxylate network on the surface of the proton-transfer protein PsbO.

In contrast to the often slow dynamics of “functional water” at protein surfaces, Songi Han at UCSB and colleagues report anomalously fast water diffusion near DNA surfaces (J. M. Franck et al., JACS 137, 12013; 2015 – paper here). They use Oberhauser effect dynamic nuclear polarization (ODNP) to look at water translation dynamics along the backbone, which entails adding spin centres along a DNA backbone to act as “reporters”. Anomalously fast here means bulk-like, in contrast to the retarded diffusion of most of the hydration water, suggesting that the DNA-water interactions are only weak for a significant proportion of the hydration shell. Such water is relatively easily displaced when proteins bind to the DNA. Thus, in comparison to proteins, DNA would be capable of storing less free energy that can be released entropically in binding interactions – and, the authors argue, makes DNA duplexes less specific in their interactions (outside, of course, of the specificity supplied by the sequence itself). So “the high mobility of the solvation water around DNA may have been tailored to its role in biological function.”

I had the pleasure of meeting Xiao Cheng Zeng of the University of Nebraska in Shanghai in November, and hearing about his interesting work on monolayer and bilayer ices. He and coworkers have recently explored the mechanism by which a preference for potassium over sodium ion transport arises in synthetic hydrophobic organic nanopores, namely the stacked macrocycles reported by Zhou et al. in Nat. Commun. 3, 1-8 (2012), and compare them with carbon nanotubes (H. Li et al., PNAS 112, 108512; 2015 – paper here). At face value the preferential K+ transport is surprising, given that K+ has the larger hydration sphere. But the researchers explain this selectivity (which is also seen in some biological ion channels) in terms of the greater robustness and structure of the Na+ hydration shell. Moreover, the roughness of the interior surface of the organic nanopores lowers the diffusivity of both ions – but more so sodium – relative to smooth-sided carbon nanotubes, with the result that the CNTs offer the highest rate of selective K+ transportation.

Jianzhong Wu at the University of California at Riverside use a combination of thermodynamic measurements (Henry’s constants) and MD simulations to examine how the degree of hydrogen bonding among water molecules changes in hydrophobic hydration shells (J. Kim et al., JPCB 119, 12108; 2015 – paper here). They find that the extent of H-bonding is slightly reduced, and that this is a significant factor in the positive hydrophobic hydration heat capacity. Certainly nothing ice- or clathrate-like here.

How do we assess the hydrophobicity of heterogeneous surfaces, composed of a mixture of hydrophobic and hydrophilic patches? Well, it’s complicated. Damián Scherlis at the University of Buenos Aires and colleagues find in simulations with coarse-grained mW water that there is a rather complex variation of water-droplet contact angle on such surfaces with the amount, distribution and arrangement of hydrophilic (hydrogen-bonding) domains on a hydrophobic surface (M. H. Factorovich et al., JACS 137, 10618; 2015 – paper here). In this case, there may be a nonlinear variation of contact angle with composition, the angle being largest for a particular fraction of hydrophobic species (about 0.6 when randomly mixed). In other words, this mixture can have a larger contact angle than the purely hydrophobic surface. What’s more, this variation depends on the size of the domains: the nonlinearity tends to vanish for hydrophilic domains bigger than about 2 nm, when the behaviour returns to being reasonably well described by the Cassie model. The same conclusions are supported by looking at the desorption pressure of water in nanopores of these compositions. This appears to offer considerable scope for tuning the wettability of surfaces.

And I have just discovered that a paper to which I contributed in a very small way, on the notion of chaotropicity as a way of understanding the limiting tolerances of biofuel-producing microorganisms, was published at the end of last year (J. A. Cray et al., Curr. Opin. Biotechnol. 33, 228; 2015 – paper here). My coauthors are to be credited with everything of real substance in this interesting and potentially useful article.
Posted by Philip Ball at 1:35 AM 77 comments: