How can this be possible? How can buckyballs be hydrophobic and at the same time apparently attracted to waters more than the waters are attracted to themselves? Ronen Zangi has recently addressed this question using molecular dynamics simulations (J. Chem. Phys., in press). He points out that buckyballs lie right at the 1-nm crossover point predicted by David Chandler and colleagues for different modes of hydrophobic hydration. But it seems that they act more like large rather than small hydrophobes, in that it’s not possible for the water to rearrange so as to preserve the hydrogen-bonding network as it can for small hydrophobic molecules.

However, buckyballs aren’t like a pair of hydrophobic plates. They are of course curved, convex surfaces, and we know that hydrophobic solvation is sensitive to curvature (Wallqvist & Berne, JPC 99, 2885; 1995). Ronen finds that, because the actual contact area of two buckyballs is rather small, the favourable free energy change for association can’t be attributed to strong solute-solute interactions, as it is for two graphene sheets say.

So the various influences here on the free energy of association are subtle. However, the crucial point is that, as the buckyballs come together, some of the hydration water changes character. The waters in the primary hydration spheres are already somewhat compromised, having on average a smaller number of hydrogen bonds than those in the bulk (these are shown in grey below). But when the buckyballs are only a few nanometers apart, there is a new class of water molecules in between them that are even more depleted of hydrogen bonding (shown in orange). And the key point is that, unlike the case of flat plates in contact, some of these anomalous water molecules remain even when the buckyballs are in contact. 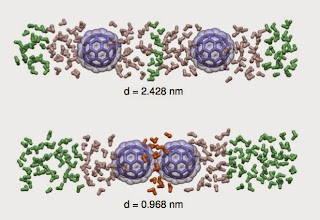 So there is a complex reckoning here of the entropic and enthalpic effects, coming from the fact that the various factors are not simply additive because of the particular scale and geometry of the hydrophobic interaction. Ronen concludes that “bucky-balls can serve as an example in which hydrophobic interaction cannot be deduced from hydrophobic solvation”. Or to put it another way, the effective pair interaction of the solute is not hydrophobic, in that solvent contributes a repulsive influence, and yet the solvation properties are hydrophobic because of the qualitative difference between the solvent-separated and fully associated particles. This, I think, is one of the best illustrations I have seen that hydrophobicity is a very slippery concept.

Martina Havenith has written a nice Perspective for JACS, with Valeria Conti Nibali, on the use of THz spectroscopy to study biomolecular hydration (JACS 136, 12800; 2014 – paper here). In particular, they discuss recent work on ligand binding and antifreeze proteins which points to the existence of a gradient in water dynamics towards the active sites, acting as a “hydration funnel”. The concept is nicely illustrated in this graphic: 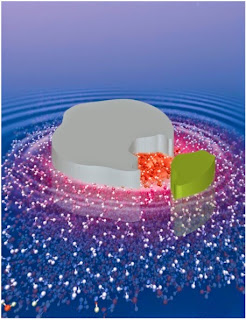 You won’t be surprised to hear me cheer on the final conclusion: “So far, in all these applications, the solvent is still a strongly underestimated and mostly neglected element of the multilateral partnership in biomolecular function.”

Intrinsically disordered proteins tend to form loose but collapsed globules that trap some water. Some of these, such as kappa-casein, have charged and basically hydrophilic residues, and their collapsed conformations trap a fair amount of water. Shruti Arya and Samrat Mukhopadhyay of the Indian Institute of Science Education and Research in Mohali have studied the dynamics of this water within globules of kappa-casein using time-resolved fluorescence spectroscopy to measure the solvation time of a fluorescent dye probe (JPCB 118, 9191; 2014 – paper here). They find that the water relaxation times are three orders of magnitude slower than the bulk, and an order of magnitude slower that that typically found at protein surfaces. In other words, they say, it seems to form a highly ordered network within the disordered globule. They speculate that the entropic gain on release of this water light explain the oligomer formation that initiates the formation of amyloid fibrils from IDPs. 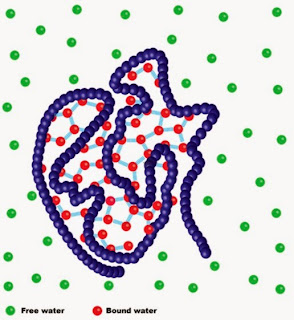 A similar approach of adding a dye-sensitized group (an aza-Trp) to ribonuclease T1 enables Wei-Chih Chao and colleagues of National Taiwan University to examine the water dynamics in this protein, and specifically in the connecting loop region of the molecule (W.-C. Chao et al., JPCB ASAP jp503914s – paper here). They find that the decay dynamics can be fitted with a two-component model, leading them to propose two conformational forms, which they call the loop-open and loop-close(d?) forms. Simulations support this idea and suggest that interconversion of the two conformers involves changes in the water network around the substituted Trp group, with water being squeezed out of the loop-close form. What I don’t get too clearly – my fault, I’m sure – is how/if these conformational changes relate to enzymatic function.

Domains of membrane proteins with different dynamics have different hydration dependence, according to Jun Wang and colleagues of the Wuhan Institute of Physics and Mathematics (Z. Zhang et al., JPCB 118, 9553; 2014 – paper here). They use NMR to follow the dynamics of the protein chains in diacylglycerol kinase, and find that while the highly mobile regions are highly sensitive to changes in hydration – the fast, large-amplitude motions are suppressed below 20% hydration – the dynamics of the more rigid domains are insensitive to hydration. This, I daresay, is what one might expect given that the rigid domains are those embedded in the lipid membrane while the mobile domains generally extend beyond it. But is this hydration dependence an epiphenomenon of the demands for folding and packing the respective regions, I wonder, or essential to those structural differences?

I recently wrote a feature for Chemistry World about the internal structures of quiescent cells and spores (here, but behind a paywall I fear), which looked to some extent into the question of what the state of the solvent in these cells is. That is now probed too by Charles Rice at the University of Oklahoma and colleagues, using deuterium NMR to look at water dynamics in bacterial (B. subtilis) spores (A. W. Friedline et al., JPCB 118, 8945; 2014 – paper here). They conclude that the water in the cytoplasm is in a mixture of states: there is some water that is mobile and accessible to proton exchange with the external environment, and also some that is more rigid and inaccessible to exchange. Some of the latter seems to be “bound water” associated with hydrated biomolecules, but some is sequestered in an essentially rigid core, which is however not ice-like. This raises questions of whether such water is a passive consequence of the dormancy of the cell (for example because of the relative lack of molecular motion such as that driven by transport motor proteins), or an active aspect of that shutdown, which perhaps helps to protect the molecular ingredients. And is it gel-like, glassy, or…? An interesting contribution to an unfolding story. 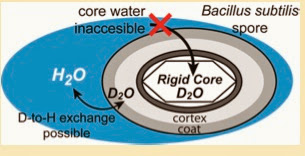 What do alcohols do to water? In particular, does an increasingly long aliphatic tail increasingly disrupt “water structure”? Well actually, no, according to the X-ray Raman scattering study of Iina Juurinen and colleagues at the University of Helsinki (I. Juurinen et al., JPCB 118, 8750, 2014 – paper here). They see no substantial difference in the effects on either the hydrogen-bond network of the solvent as a whole, nor in the tetrahedrality of the alcohols’ solvation water, in progressing from methanol to ethanol and 1-propanol. This supports the earlier conclusions for methanol alone by Dixit et al. (Nature 416, 829; 2002), who found that the total number of hydrogen bonds is unchanged in adding the alcohol to water.

And what drives the association of glycine oligomers in water (such systems being sometimes considered simple models of intrinsically disordered proteins)? Montgomery Pettitt at the University of Texas in Galveston and colleagues explore that issue through simulation of Gly5 (D. Karadur et al., JPCB 118, 9565; 2014 – paper here). They conclude that the aggregation is not driven by hydrogen-bonding but by electrostatic interactions between the partially charged atoms. Gly5 can’t really be considered hydrophobic, so hydrophobic interactions don’t obviously play a part, although interestingly the researchers see some features often associated with them.

Some brief glimpses. Harsha Annapureddy and Liem Dang at PNNL in Washington present a summary of their attempts to understand water exchange in the solvation shells of ions using molecular simulations, for example by calculating the potentials of mean force (JPCB 118, 8917; 2014 – paper here). Giuseppe Bellavia and colleagues at the University of Lille explore how glycerol further enhances the denaturant properties of trehalose by rigidifying the (still liquid) solvent matrix (G. Bellavia et al., JPCB 118, 8928; 2014 – paper here). Timothy Duignan and colleages at ANU calculate ion solvation energies at the air-water interface and say that their findings can reproduce the surface tensions of electrolyte solutions (T. Duignan et al., JPCB 118, 8700; 2014 – paper here). And on a similar Hofmeister theme, Ferenc Bogár at the University of Szeged and coworkers report MD simulations of the effect of various salts on the interfacial tension between water and a small model protein (F. Bogár et al., JPCB 118, 8496; 2014 - paper here).

OK, with apologies to those of you who have sent me papers, I will leave it here for now and deal with them in the next post – and I’m still only caught up to early August… Oh, and I should just add that I thoroughly enjoyed this recent conference on nanobubbles in Shanghai, hosted by the Shanghai Institute of Applied Physics. And that offers me an excuse for a parting remark from Confucius that some of you might find reassuring: “the intelligent find joy in water.”
Posted by Philip Ball at 4:30 AM 17 comments: