Catching up in the Ruhr

The direct-interaction picture of the action of denaturants receives some support from a study by Santosh Kumar Jha and Susan Marqusee of UC Berkeley (PNAS 111, 4856; 2014 – paper here). They look at the denaturing activity of guanidinium chloride on RNase H using FRET, UV CD and kinetic measurements. They find that the initial stage of unfolding involves a fast transition to a dry molten globule, showing that it entails denaturant interactions that do not affect the solvent-accessible surface area or disrupt the hydrophobic core. It is hard to square this with any idea that GdmCl acts, at least initially, via some kind of destabilization of hydrophobic interactions.

Benjamin Schuler at the University of Zurich and coworkers also use FRET to study solvation effects on conformational changes, in this case looking at the temperature-dependent collapse of five intrinsically disordered proteins (R. Wuttke et al., PNAS 111, 5213; 2014 – paper here). These proteins become more compact as the temperature is raised. Naively this might argue for a hydrophobic, entropically driven mechanism of collapse, but the researchers argue that it’s not that simple, not least because the effect is strongest for the most hydrophilic IDP. They say that this implies a dominant contribution from temperature-dependent solvation changes for charged and polar residues, although it seems the details of that phenomenon remain to be elucidated.

There are, broadly speaking, two kinds of IDPs. One type (group a) is completely disordered, the other (group b) has regions of defined secondary structure connected by disordered stretches. Nidhi Rawat and Parbati Biswas of the University of Delhi have compared the dynamics of intermolecular and intramolecular hydrogen bonds for the two cases using MD (J. Phys. Chem. B 118, 3018; 2014 – paper here). They find that both exhibit rather similar dynamics, in both cases with the intramolecular H-bonds rather longer-lived than the intermolecular ones. But the former are somewhat more persistent in group b IDPs – perhaps as one would expect from their higher degree of structure.

Terahertz spectroscopy as a means of understanding picosecond and nanometre-scale hydration dynamics have been pioneered by Martina Havenith and her coworkers at Bochum (from where I am at this very moment returning, if the extraordinary summer storms permit…). But it has been challenging to correlate particular spectral features in this frequency range with particular molecular-scale motions. By combining THz measurements with ab initio MD simulations conducted by Dominik Marx, the Bochum group has now been able to make this connection for the case of glycine, using heavy water to identify distinct intramolecular and intermolecular vibrations, rotations and translations involving interfacial water (J. Sun et al., JACS 136, 5031; 2014 – paper here). 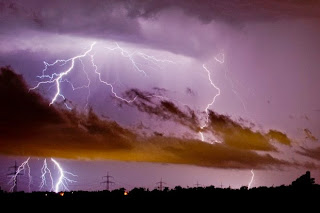 Proof that the RESOLV summer school in Bochum was electrifying...

It was a pleasure to meet Roland Winter again on this trip. His group at Dortmund, with collaborators in Maryland, have used neutron spin echo spectroscopy to study solvent effects on the formation of amyloid fibrils by (bovine) insulin, which happens in the presence of sodium chloride (M. Erlkamp et al., J. Phys. Chem. B 118, 3310; 2014 – paper here). They find that solvent conditions (pH, salt concentration) that promote aggregation support self-diffusion of insulin, which suggests the absence of strong concentration gradients, whereas when fibril formation is suppressed, diffusion displays the collective character diagnostic of strong concentration fluctuations. Does this seem counterintuitive to you? It does to me. But I think I see the point that stronger fluctuations imply a ‘softer’, low-compressibility system in which intermolecular interactions are rather weak.

Ariel Fernández has previously argued (J. Chem. Phys. 139, 085101; 2013) that the normal picture of the electrostatics of hydration first developed by Debye, in which water dipoles tend to align themselves with the electrostatic field, can break down at protein surfaces when sub-nanometre curvature and/or chemical heterogeneity produces constraints and frustration, leading to defects in the matrix of water-water interactions. These in turn introduces an anomalous polarization orthogonal to the electric field. During protein folding, water molecules that introduce these anomalies are driven away from the interface to minimize electrostatic energy, leaving water-exposed hydrogen-bonding groups on the protein backbone called dehydrons. In a preprint, Fernández now argues that this energy minimization drives the folding process, and that it leads to the healing of packing defects as the protein folds. The torque exerted by the protein’s electrostatic field on the water molecules at these defects inhibits water reorientation. Fernández suggests that antifreeze proteins have a particularly high density of such defects, and the resulting hindrance of water reorientation prevents the nucleation of ice at these sites.

More active water networks: Kakali Sen and Walter Thiel at the MPI für Kohlenforschung at Mülheim find using MD and quantum chemical simulations that the mechanism of the P450 enzyme CPY107A1, which catalyses a hydroxylation, involves two water networks at the active site (J. Phys. Chem. B 118, 2810; 2014 – paper here). At least one of them, based around residue E360, is involved in proton transfer to enable activation of molecular oxygen at the Fe(II) reactive site.

And again: a water wire supports proton translocation in Complex I, in which this proton pumping is redox-driven by being coupled to the movement of electrons from NADH to quinones: the first step in the mitochondrial and bacterial respiratory process. That’s the conclusion of a simulation study by Gerhard Hummer at NIH and colleagues (V. R. I. Kaila et al., PNAS 111, 6988; 2014 – paper here). The results are based on the crystal structure of Complex I from E. coli, and they imply that the water channel is formed by the cooperative hydration of three antiporter-like subunits within the membrane domain of the complex. The researchers argue that their results “suggest that water-gated transitions may provide a general mechanism for proton-pumping in biological energy conversion enzymes”, such as bacteriorhodopsin and cytochrome c oxidase.

OK, so we know that hydrated proteins can undergo a glass-like transition at low temperatures. But can essentially dry proteins do the same thing? That question is explored by Anna Frontzek at the A. F. Ioffe Physical Technical Institute of the Russian Federation in St Petersburg and colleagues (A. Frotnzek et al., J. Phys. Chem. B 118, 2796; 2014 – paper here). They look at BSA at a hydration of just 0.04 and find anomalous relaxational dynamics around 250 K, indicative of a glass-like transition even in the absence of significant hydration water.
Posted by Philip Ball at 10:05 AM 10 comments: