The main news this time round must be the “special topic” issue of J. Chem. Phys. on “biological water”, edited by Gerhard Hummer and Andrei Tokmakoff (here; see their preface here). I’m not going to go through all the contributions, nor invidiously to pick out any ones in particular – needless to say, it’s a treasure trove, and well worth browsing.

A completely new motif for ice binding in an antifreeze protein has been identified by Peter Davies and colleagues at Queen’s University in Kingston, Ontario, in a midge native to Lake Ontario (K. Basu et al., PNAS 112, 737; 2015 – paper here). It is a small protein of just 79 residues, and contains a 10-residue coil crosslinked by a disulfide bond, which presents seven tyrosine chains in a flat array for ice binding. The protein, which has no known homologues, seems to be a relatively “cheap” means of protecting the midges from occasional night frosts when they emerge in the spring. 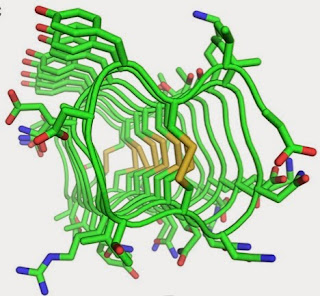 The idea that protein denaturants such as guanidinium cations and urea act via direct interactions with the protein is explored by Sandeep Patel and colleagues at the University of Delaware, who use MD simulations to look at the orientations of these molecules close to hydrophobic residues and how these affect solvent fluctuations in the vicinity (D. Cui et al., JPCB 119, 164; 2015 – paper here). They find a correlation between the stability of the molecular arrangement at the interface (e.g. parallel or perpendicular orientations of the denaturant) and the degree of fluctuation induced – implying that the effects of the denaturants may be related to their tendency to introduce malleability in the local hydration shell, with consequences for hydrophobic interactions.

Intracellular lipid-binding proteins (iLBPs) are central to fatty-acid uptake, transport and metabolism. They have an intriguing structure, in which a β-barrel contains a large water cluster. Shigeru Matsuoka and colleagues at Osaka University have attempted to figure out what the role of these waters is, using MS simulations of human-heart-type fatty-acid binding protein (FABP3), a typical iLBP (D. Matsuoka et al., JPCB 119, 114; 2015 – paper here). They observe two conformations. The empty cavity is wide open, with a relatively ordered hydrogen-bond network inside it. But when the ligand is bound, some of the waters exit through a “back portal” while others provide a hydrogen-bonded latch, connecting to highly conserved hydrophilic residues, that “seals” the cavity with the fatty acid (stabilized by hydrophobic interactions with the interior) inside.

In an arxiv preprint (1412.2698 – paper here), Martin Wolf and colleagues at Augsburg present dielectric measurements of hydration water dynamics of lysozyme in frozen solution, ordinary solution and a hydrated powder. They claim to find clear evidence for bimodal dynamics, with a crossover that supports the notion of a fragile-to-strong transition in the metastable “No Man’s Land” regime.

(Incidentally, did I detect in Twitter some skepticism about how so many of these studies present their results as N=1 samples consisting of lysozyme or HIV protease? If so, it’s a fair concern, but you have to start somewhere. As Wolf and colleagues acknowledge, further studies are needed here to determine the generality.)

The fact that I write every month for Nature Materials makes it all the more unforgiveable that I failed to spot the paper there by Wang et al. in 2013 showing how water may play a vital structural role in bone apatite (Nat. Mater. 12, 1144 – paper here). By way of atonement, let me point to a nice contribution by Neeraj Sinha at the Center of Biomedical Research in Lucknow and colleages who describe a solid-state NMR method for investigating the nature of collagen hydration in the bone matrix (R. K. Rai et al., JPCB 119, 201; 2015 – paper here). They say that the hydration in situ seems to be significantly different from that of extracted collagen, and adds to the idea that water plays a big part in determining and modifying the mechanical properties.

We need new flu drugs, agreed? Bill DeGrado at UCSF and colleagues report a new strategy for designing inhibitors of flu viruses that bind in two variants of the M2 proton channels (WT and S31N), where a network of water molecules assists proton transport (Y. Wu et al., JACS 136, 17987; 2014 – paper here). For these two strains, in which the inhibitor binds with different orientations, the initial results suggest that the antiviral activity should be comparable to the existing antiviral amantadine. 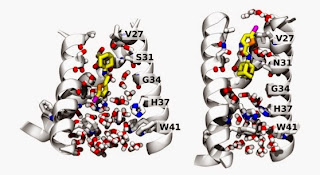 The role of hydration waters in the sequence-specific bending flexibility and conformational stability of DNA is studied in a paper by Jerzy Leszczynski at Jackson State University and colleagues (T. Zubatiuk et al., JPCB 10.1021/jp5075225 – paper here). They look specifically at A-tracts of B-DNA, which resist deformations and so might be important in the organization of nucleosomes. They find that this stiffening is influenced by the specific patterns of structural water within both the major and minor grooves

Tunneling and delocalization of protons in a hydrogen-bonded network in the active site of ketosteroid isomerase is described in ab initio simulations by Thomas Markland and colleagues at Stanford (PNAS 111, 18454; 2014 – paper here). They say that this leads to a boost in the acidity of the site by around four orders of magnitude compared with the classical situation. There are no actual waters in the site in this case, but the general implication seems clear enough. 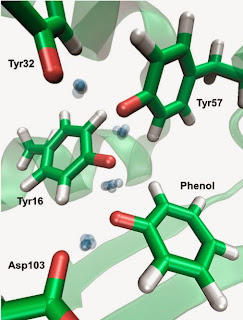 Another nice example of “functional water” at an active site: Vivek Sharma at the Tampere University of Technology in Finland and colleagues say that an organized cluster of water molecules in cytochrome c oxidase helps to steer proton transfer in the right direction, so that the electron transfer in the reduction of oxygen to water can be coupled to proton pumping across the membrane (PNAS 112, 2040; 2015 – paper here). Their simulations indicate that the waters reorganize in a redox-dependent way so as to coordinate electron transfer with proton transfer along the requisite path (see diagram of the two states below). 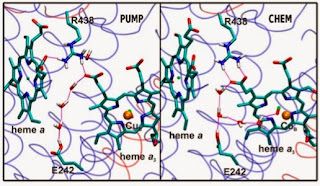 There is increasing reason to believe that hydrophobicity is a context-dependent property. That conclusion might be read into the findings of Dor Ben-Amotz and colleagues at Purdue on how the presence of a charged group such as carboxylate or tetraalkylammonium alters the hydration structure around an adjacent aliphatic chain (J. G. Davis et al., JPCB jp510641a – paper here). They found in previous work (Nature 491, 582; 2012) there seems to be a change in the hydration structure of aliphatic alcohols at a chain length of around 1 nm, consistent with the proposal of such a crossover by David Chandler and colleagues. Using Raman spectroscopy and simulations, they now see a similar structural change for aliphatic carboxylic acids with different chain lengths, but that this transition is suppressed when the carboxylic acids are deprotonated. The effect is stronger for tetraalkylammonium ions – that is, the perturbation created by the charged head group extends several methylene groups down the aliphatic tail. So it would seem that these charged head groups alter the hydrophobic hydration in ways that neutral hydrophilic groups do not.

This fits very nicely with recent work by Sam Gellman, Nicholas Abbott and colleagues at Wisconsin-Madison, who find that the hydrophobic interactions of methyl-terminated self-assembled monolayers, as measured by chemical force microscopy and single-molecule force measurements for docking of the nonpolar domains of peptides, are altered by the inclusion of some cationic amine and guanidinium groups among the SAM (C. D. Ma et al., Nature 517, 347; 2015 – paper here). Curiously, protonated amine groups enhanced the hydrophobic interactions, while charged guanidinium groups suppress them. Gellman and colleagues reach much the same conclusion as Dor’s team: that the results are consistent with the idea that “solvation shells are susceptible to the influence of neighbouring atoms, especially strongly charged ones.” There’s a nice News and Views piece accompanying the paper by Shekhar Garde (Nature 517, 277 – here).

How does dewetting between two hydrophobic surfaces happen? The classic picture is that this is capillary condensation, a first-order process that requires the formation of a nucleus of a critical size – say, a vapour tube bridging two planar hydrophobic surfaces. But Richard Remsing at the University of Pennsylvania and coworkers report simulations in which dewetting seems to circumvent this classical mechanism: fluctuations of the confined water give rise to a cavity larger than the size of a critical nucleus, which then grows spontaneously (R. Remsing et al., arxiv 1502.05436 – paper here). This certainly fits with earlier suggestions by the Chandler group that dewetting is driven by solvent fluctuations.

I wonder, though, if we have an adequate picture of how these fluctuations fit within a standard picture of confined fluids. Where do they come from, and are they specific to water or a consequence of solvophobicity more generally? I have been talking to (admission of interest: my one-time PhD supervisor) Bob Evans at Bristol about this, who pointed me to a paper in press with J. Phys. Cond. Matt. with Maria Stewart which hopes to shed light on the issue. They point out that even for simple Lennard-Jones fluids close to solvophobic walls there is an enhancement, over just a molecular diameter or two, of the local compressibility. This, they say, looks very much like the “enhanced fluctuations” that David Chandler, Shekhar Garge and others have reported for water at hydrophobic surfaces. In other words, this local compressibility, analogous to the surface susceptibility in an Ising model that serves as an indicator of the approach to a critical wetting or drying transition – offers a properly defined thermodynamic measure of what previously has been a rather vague, hand-waving concept. And it implies that there is nothing here that is unique to water.

How much do quantum effects that allow for electronic polarization matter to the energetics of ligand-receptor binding calculations, relative to molecular mechanics calculations that neglect them? Adrian Mulholland and colleagues at Bristol address this question by looking at the binding of water molecules within the cavity of the influenza viral protein neuraminidase, a target for antivirals such as oseltamivir and peramivir (C. J. Woods et al., JPCB 119, 997; 2015 – paper here). They consider this system because of the recognized importance of bound water molecules in drug design, and in particular the known function of a water molecule in oseltamivir binding. Structural studies of ligand-neuraminidase complexes have revealed two kinds of important “structural” waters: one in a hydrophilic site, the other a hydrophobic one. They find that in going from molecular modeling to ab initio calculations, the difference in binding energy due to water polarization can be as much as 1 kcal/mol, and is greater for the hydrophilic water.

Laurence Pratt at Tulane University and his coworkers have dissected the role of intermolecular forces on hydrophobic interactions (M. I. Chaudhar et al., arxiv preprint 1501.02495 – paper here). They find that for hydrated argon atoms, including realistic solute attractive forces substantially weakens the hydrophobic attractions relative to the situation without them (as assumed in Pratt-Chandler theory formulated in 1977 for hard spheres: JCP 67, 3683). Among other things, it’s pretty remarkable that Laurence has returned to reconsider the idea after almost 40 years!

This is not directly about hydration, but it’s involved: I have a story here in Chemistry World about a new computational method for calculating the free energies of ligand binding to a wide range of protein receptors (L. Wang et al., JACS 137, 2695; 2015 – paper here). The authors claim that it comes within 1 kcal/mol of the measured binding energies for most of the cases studied. As far as hydration is concerned, Robert Abel at Schrodinger, the company that developed the method, says to me that “These simulations use explicitly solvated molecular dynamics. So, molecular hydration affects should be well-described. Such an example of a ligand displacing a water from a cavity is described in in figure 4 sub-panel C and at the bottom second column of page 2699 of the manuscript.”
Posted by Philip Ball at 2:20 AM 33 comments: