Spectral tuning and pumping in rhodopsins

Inert gases in water will under some conditions not exhibit the expected hydrophobic attraction but will form a solvent-separated pair. Yuri Djikaev and Eli Ruckenstein at SUNY at Buffalo rationalize this observation in the course of developing a new approach to describing hydrophobic hydration (J. Phys. Chem. B 117, 7015; 2013 – paper here). They derive an analytical expression for the number of hydrogen bonds each water molecule has as a function of its distance from the hydrophobic particle, and find that the hydration energy can be positive even for apolar particles if they are small enough, thanks to van der Waals interactions.

On the other hand, two guanidinium ions can form a like-charge ion pair in water, as reported by Richard Saykally and colleagues at Berkeley from XAS measurements (O. Shih et al., J. Chem. Phys. 139, 035104; 2013 – paper here). Their calculations indicate that the ions form a stacked arrangement through pi* interactions.

It is very nice to see that Bruce Berne and colleagues are extending the work on drying transitions in protein assembly to their potential role in molecular recognition and ligand binding (J. Mondal et al., PNAS 110, 13277; 2013 – paper here). Their simulations of an idealized hydrophobic particle being bound in a cavity indicate that the latter can fluctuate between wet and dry states, which have distinct kinetic binding profiles.

More on water’s liquid-liquid transition: Yaping Li and colleagues at the University of Arkansas see such a first-order transition between HDL and LDL, with an associated critical point, in simulations using the so-called Water potential from Adaptive Force Matching for Ice and Liquid (WAIL), which they argue is a particularly reliable potential because it is not biased by fitting to experimental data (Y. Li et al., PNAS 110, 12209; 2013 – paper here).

And in a preprint apparently heading for the Eur. Phys. J., Hajime Tanaka presents a new model of the liquid state based on an order parameter that describes bond orientational ordering, which he says explains many of the anomalies of tetrahedrally bonded liquids (including a liquid-liquid transition) (arxiv.org/abs/1307.0621). This huge and ambitious paper also provides accounts of glass formation and fragility, quasicrystal formation and other metastable crystallized states.

Somewhat related in exploring tetrahedral order in water is a preprint destined for Chem. Phys. Lett. by Marcelo Carignano of Northwestern University and colleagues, who have compared this aspect of water structure along with hydrogen-bond lifetimes and diffusion coefficients in simulations with four different water potentials (SPC/E, TIP4P-Ew, TIP5P-Ew, Six-site) (arxiv/1307.3611). They find that there are significant differences below 270 K, depending on whether or not the models include explicit lone pairs.

Shaoyi Jiang and colleagues at the University of Washington in Seattle present a case, from simulations and NMR measurements, that the hydration differences for salt bridges in proteins contribute significantly to their relative stabilities (A. D. White et al., J. Phys. Chem. B 117, 7254; 2013 – paper here).

More on spectral tuning of photoactive sites by hydration environments. Sivakumar Sekharan and colleagues at Yale say that the chloride-pumping transmembrane retinal protein halorhodopsin in a halophile works by subtle rearrangements of waters and ions in the vicinity of the chromophore as chloride translocation progresses, inducing changes in chromophore bond lengths that affect its absorption wavelength (R. Pal et al., JACS 135, 9624; 2013 – paper here). Meanwhile, Hyun Woo Kim and Young Min Rhee at the Pohang University of Science and Technology in Korea say that the pH-dependence of emission from firefly oxyluciferin – a redshift in acidic conditions – seems to be fine-tuned by a water molecule in the active site that can mediate the dynamics of neighbouring groups to the chromophore (J. Phys. Chem. B 117, 7260; 2013 – paper here).

Valentin Gordeliy of the Université Grenoble Alpes and colleagues describe the mechanism of a different rhodopsin-like pump, an unusual proteorhodopsin from a permafrost bacterium that pumps protons in a different manner to other known rhodopsins (I. Gushchin et al., PNAS 110, 12631; 2013 – paper here). Unusually, this structure has a proton release site (a lysine) already connected to the bulk solvent by a water chain in the ground state. There’s a nice graphic that illustrates the similarities and differences in the water-containing cavities of the channel for this structure and other rhodopsins, bacteriorhodopsin and xanthorhodopsin, the closest homologue of this one (ESR): 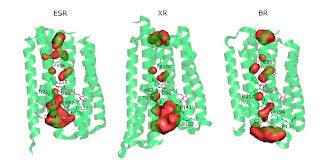 I guess it is ultimately a cautionary tale that one should extract from the simulation study of reverse micelles by John Straub and colleagues at Boston University: they say that the structure and dynamics of the encapsulated water and the overall micelle assembly depend strongly on the force fields used (A. V. Martinez et al., J. Phys. Chem. B 117, 7345; 2013 – paper here). In any event, the micelles tend not to be spherical but undergo pronounced shape fluctuations, a point made also by earlier simulations but which tends to be ignored in interpreting experimental data.

I must confess that I’d not previously come across inhomogeneous fluid solvation theory (IFST) as a general method for calculating the effect of a solute on the solvent structure. But now David Huggins and Mike Payne at Cambridge have assessed how well it does for predicting the hydration free energies of small solutes (J. Phys. Chem. B 117, 8232; 2013 – paper here). They look at six solutes such as benzene, isobutene and methanol, all in water, and figure that IFST does pretty well in comparison with a more sophisticated theory but that accurate prediction of entropies might suffer from poor sampling of the available configurations unless the simulation times are rather long.

And here’s a curious one: George Reiter at Houston and colleagues say that water confined on the scale of about 2 nm has a different ground-state configuration of valence electrons than in the bulk (G. F. Reiter et al., Phys. Rev. Lett. 111, 036803; 2013 – paper here). They explore the issue using X-ray Compton scattering to probe water in the pores of Nafion, but they say, reasonably enough, that “Biological cell function must make use of the properties of this [nanoconfined] state and cannot be expected to be described correctly by empirical models based on the weakly interacting molecules model.”
Posted by Philip Ball at 1:36 AM 1 comment: