Ariel Fernández is developing a picture of biomolecular hydration that might be considered to make it analogous to the standard picture of liquid-solid interfaces in terms of surface free energy. That’s to say, he defines a measure called the epistructural interfacial tension (EIT) which plays the role of a kind of surface tension for proteins in water, being increased where hydration is imperfect (that is, where hydration water molecules have a reduced number of hydrogen-bond contacts) relative to the bulk. This EIT can then be considered to promote protein-protein associations where this can lower the total free energy, via hot spots on the protein surface where the EIT is elevated: regions of high surface free energy, you might say. Ariel has developed this notion previously (Proc. R. Soc. A 467, 559; 2011), and in a new paper (Phys. Rev. Lett. 108, 188102; 2012 – paper here) he explains how to derive the ‘water coordination field’ around a solute particle that minimizes the EIT. This reduces to the macroscopic surface tension in the large-curvature limit. Hot spots for protein association correspond to those positions on the surface that reduce the EIT most significantly on binding.

I have seen few more striking examples of the involvement of ‘structured’ hydration water in enzyme action than that supplied by Ursula Rothlisberger at EPFL in Lausanne and colleagues (E. Brunk et al., JACS 134, 8608; 2012 – paper here). They use classical and quantum MD to look at the mechanism of the DNA-repair enzyme MutY, which excises a DNA base damaged by hydroxyl radical oxidation. The first (rate-determining) step of the process involves protonation of the N7 of adenine, which is assisted by a highly organized catalytic cluster of five water molecules, as shown here. The authors suggest that the particular arrangement of hydrophobic and hydrophilic residues around the water cluster act as a ‘water trap’ to ensure that these waters have long residence times. 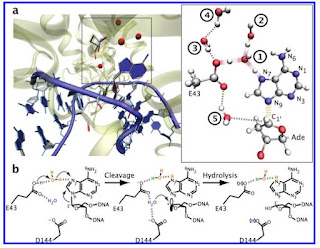 How hydration influences and perhaps dictates pressure- and cold-induced protein denaturation has been much studied, but is still in debate. Payel Das of IBM Yorktown Heights and Silvina Matysiak of the University of Maryland shed some light on this question with MD simulations of the denaturation of a model 32-mer hydrophobic polymer (J. Phys. Chem. B jp211832c – paper here). They find that folding to the compact state happens via a hairpin-like configuration with a vapour bubble at the elbow, and that high pressure suppresses this process by reducing water fluctuations – observations that seem rather consistent with the current view of dewetting-induced hydrophobic collapse. Cold, meanwhile, leads to enhanced tetrahedral ordering of the hydration shell, which also suppresses the collapse.

Ah, but here’s the thing: cavities – or if you like, vapour bubbles – inside a protein have been generally found to be destabilizing, tending to induce denaturation, as discussed in a Commentary article in PNAS by Brian Matthews of the University of Oregon (PNAS 10.1073/pnas.1204795109 – paper here). This piece is motivated by a paper by Roche et al. (PNAS 109, 6945; 2012 – paper here) looking at the influence of cavities on pressure denaturation, specifically on the pressure-induced unfolding of SNase mutants that have appreciable dry cavities in their interiors. They find that the cavities play a dominant role in the unfolding process via the reduction in protein volume on denaturation.

The coupling of protein and hydration-shell dynamics is the subject of a paper by Jeremy Smith and colleagues at Oak Ridge (L. Hong et al., Phys. Rev. Lett. 108, 238102; 2012 – paper here). They follow the dynamics up to ns timescales in MD simulations and neutron-scattering measurements of lysozyme, and find that the protein dynamics can be decomposed into three components: diffusion within a local potential well, methyl rotations and nonmethyl ‘jumps’ – which I take to be jumps of localized diffusional chain motion from one potential well to another. Hydration seems to increase the probability of these latter jumps, but it also broadens the volume accessible for localized diffusion – in effect making the protein ‘softer’. Moreover, this effect propagates from the solvent-accessible surface deep into the ‘dry’ protein interior, loosening up the entire molecule.

Coupling of hydration dynamics is also the topic of a study by Kevin Kubarych and colleagues at the University of Michigan (J. T. King et al., J. Phys. Chem. B jp300835k – paper here). They use ultrafast IR spectroscopy to probe water dynamics near the surface of two variants of lysozyme. As previous studies have indicated, these dynamics are highly heterogeneous in space, and can vary from bulk-like to highly retarded, the latter being found at extended hydrophobic surfaces and being due to reduced hydrogen-bonding exchange. Using solvent-exchange, they also find that the liberation of this water drives the association of small molecules (and by extension, perhaps other proteins) at the hydrophobic protein surfaces.

Bridging water molecules often play an important catalytic role in receptor-substrate interactions. But not, it seems, in the mechanism of threonyl-tRNA synthetase: James Gauld of the University of Windsor in Canada and colleagues show that, contrary to previous suggestions, a water molecule here seem to serve no useful role, but only disrupts the process (E. A. C. Bushnell et al., J. Phys. Chem. B 116, 5205; 2012 – paper here).

The effect of progressive hydration of a protein from an essentially dry state is studied by Oleg Boyarkin and colleagues at EPFL in Lausanne (N. S. Nagornova et al., Science 336, 320; 2012 – paper here). They form gas-phase clusters of the macrocyclic peptide gramicidin S complexed with various numbers of water molecules, from 1 to 50, and characterize the interactions using vibrational spectroscopy to monitor hydrogen-bonding. The effect of progressive hydration is most pronounced for the first two water molecules, which disrupt intramolecular non-covalent (amine cation to pi) bonds and cause significant elongation of the peptide, bringing it into a conformation close to that of the fully hydrated state.

An interesting preprint on dewetting-induced hydrophobic attraction by Naiyin Yu and Michael Hagan at Brandeis (arxiv:1206.1828 – paper here). The latest view of this picture (see Patel et al., J. Phys. Chem. B 116, 2498 (2012) – Hagan is a coauthor of this paper) posits that proteins that self-assemble via hydrophobic interactions tend to sit close to a dewetting transition, which – if it doesn’t happen spontaneously – might therefore be induced by small perturbations. Yu and Hagan support this idea with simulations of the dimerization of the HIV capsid protein. While the wild-type subunits assemble only by gradual expulsion of water, mutations enacted in silico to replace three hydrophilic residues at the interface with hydrophobic ones can trigger dewetting – and moreover that they do so in a way that reveals the cooperativity of drying and the sensitivity to surface topography. As the authors argue, “Since the CA-C dimerization interface is typical of protein binding surfaces, our results raise the possibility that many proteins sit near a dewetting transition”.

A simple model of the hydration of a hydrophobic particle is presented by Ken Dill of Stony Brook and colleagues in Ljubljana (M. Luksic et al., J. Phys. Chem. B 116, 6177; 2012 – paper here). The model is two-dimensional, with water molecules modelled as ‘Mercedes Benz’ circular particles that engage in trigonal hydrogen bonding – simple enough to be solved almost analytically. The aim here is to probe the effects of hydrogen bonding and van der Waals interactions on the thermodynamics of hydration. The model is able to qualitatively capture the trends seen experimentally, such as the temperature dependence of thermodyamic functions such as the heat capacity and the effect of changing solute size, establishing it as a computationally cheap starting point for more sophisticated 3D models.

Solvation of a simple model hydrophobe is also the subject of a study by Pier Luigi Silvestrelli and colleagues at the University of Padova (L. Rossato et al., J. Phys. Chem. B 116, 4552; 2012 – paper here). They perform first-principles calculations for the hydration of methane, and find that the hydrophobic solute does not (as has been sometimes suggested) lead to a substantial slowing of the dynamics of the few water molecules in the first hydration shell, but rather to a slight (less than twofold) slowing of many water molecules. This slowing is caused by retardation of hydrogen-bond exchange.

More problems for the notion of ions as structure-makers and breakers comes from a study by Nuno Galamba of the University of Lisbon, who uses MD simulations to look at the perturbations of water tetrahedrality in the coordination shells of sodium halides (J. Phys. Chem. B 116, 5242; 2012 – paper here). Galamba points out how confused the current kosmotrope/chaotrope picture already is, for example because the effects of an ion on ‘water structure’ can be quite different in different hydration shells. Galamba concludes that a classification of kosmotropes/chaotropes based on the first hydration shell does not necessarily relate to what happens beyond that, so that the position of an ion in the Hofmeister series does not necessarily relate in a simple or transparent way to its overall effect on the hydrogen-bonded network of water. In terms of the implications for biomolecules, the paper’s final sentence provides, I think, a fair statement of the emerging consensus: “ion−protein interactions are likely to be much more significant than ion-induced long-range water structure perturbations, in agreement with the current view about Hofmeister ion effects on protein stability.”

Not quite the normal “water in biology” fare, but certainly warranting that general description, is a paper by Philippe Marmottant at the University of Grenoble and colleagues on water under tension (O. Vincent et al., Phys. Rev. Lett. 108, 184502; 2012 – paper here). Such water occurs in the xylem of trees, where it is drawn up by transpiration from leaves. I recently saw a very nice presentation on this subject by Adrian Strook at Cornell, who is making studies along similar lines to that reported in this paper. To model the plant system, Marmottant and colleagues use a hydrogel perforated with a regular array of cavities about 50 microns across. The main question they set out to investigate is what drives cavitation when the water pressure becomes increasingly negative – in plants, cavitation threatens to disrupt water transport. The tension here is generated simply by letting water evaporate from the gel. It seems that, when a bubble is nucleated (either spontaneously or stimulated by laser), it grows quickly to a quasi-equilibrium radius and then grows rather slowly larger – a very different process from cavitation in a bulk liquid, where cavitation is typically followed by rapid, energetic and potentially destructive bubble collapse (for example leading to sonoluminescence).
Posted by Philip Ball at 6:48 AM 4 comments: