The things internal waters get up to

I’d not previously come across guanine quadruplexes (GQs) before seeing the paper by Van Ngo and colleagues of the University of Southern California (J. Phys. Chem. B 118, 864; 2014 – paper here). These structures have been seen in human telomeres, where they can form from single-stranded DNA, but their biological role is still unclear. Telomeric GQs are stabilized by monovalent cations such as sodium, potassium and ammonium, and they have been shown capable of conducting such ions along their axis, suggesting that they can be exploited as artificial ion(-selective) channels. Ngo and colleagues investigate this process of ion conduction using MD. They find that the central channel of a GQ can host a single-file chain of water molecules, and that the passage of ions along this channel is accompanied by water molecules being “knocked out” of the chain and escaping the channel. It seems that sodium ions can move along the axis at scarcely any energetic cost, whereas for potassium there is a barrier of about 4 kcal/mol for progression from one binding site to the next. Potassium is, however, the optimal fit inside the GQ core, and so these ions are more likely to be selectively bound, while sodiums are more readily conducted. 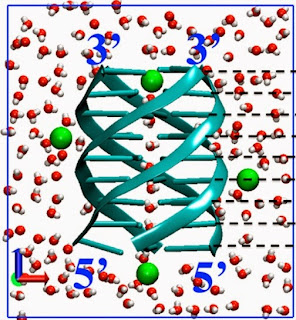 The ion channel and water chain 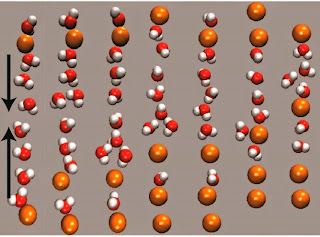 How sodium ions move down the chain

Some time ago, Bertil Halle and Johan Qvist reported NMR results showing that the effect of temperature on water dynamics in the hydration shell of a hydrophobic small solute is non-monotonic (JACS 130, 10345; 2008). A molecular-scale explanation for this has never really been developed. That’s the objective of a paper by Damien Laage at the ENS in Paris and colleagues (E. Duboué-Dijon et al., J. Phys. Chem. B 118, 1574; 2014 - paper here). They have previously accounted for the retarded water dynamics in the hydration shell on the basis of excluded-volume effects that hinder local rearrangements of the hydrogen-bond network. This is the starting point for the new work (in which the solute is TMAO), but it alone is not sufficient to explain the temperature dependence. Rather, the researchers need to include an additional perturbation that describes the difference between structural fluctuations in the shell and in the bulk: at low temperatures, the constraints created by the interface with the solute impose a lower degree of structuring in the shell than is possible in the bulk.

Damien has followed this with a subsequent paper with Aoife (that’s “Eefa” to you non-Celts) Fogarty, in which they probe the reorientational dynamics of individual waters in the hydration shells of four different proteins: acetylcholinesterase, subtilisin Carlsberg, lysozyme and ubiquitin (J. Phys. Chem. B jp409805p – paper here). Despite their many differences, all of these proteins have rather smiliar hydration-shell dynamics, which the authors suggest is an indication of how the dynamics are determined by rather general features of surface chemistry and topology, which induced excluded volume effects and hinder the approach of new hydrogen-bond acceptors within the hydration network. Fluctuations of the protein surface provide an additional source of dynamic heterogeneity. The authors also explore the effects of water confinement, for example within clefts and cavities of partially hydrated subtilisin. 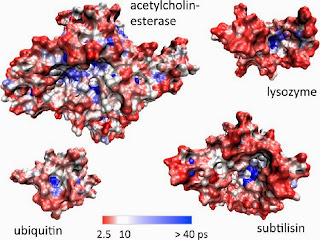 The water reorientational times mapped onto the surfaces of the respective proteins.

More roles for internal water molecules at ligand binding sites: Dario Estrin of the University of Buenos Aires and colleagues find that a water molecule close to the heme group of a group of mutated forms of the thermostable hemoglobin can influence the energy barriers for ligand entry and exit through steric hindrance (J. P. Bustamante et al., J. Phys. Chem. B 118, 1234; 2014 – paper here).

It seems that internal waters may also be critical for the functioning of ion channels. Michael Green and colleagues at CUNY report quantum calculations on the KV1.2 potassium channel which suggest that water molecules hydrating the ion in the channel, but not visible in X-ray structures, have a determining influence on the path of the ion (A. M. Kariev et al., Biophys. J. 106, 548; 2014 – paper here). Without an internal water network (for example, in a mutant form of the channel), the ion can get ‘stuck’, and the conductivity is much reduced. The authors also argue that protonation of the His418 residue by water is essential for gating, which might explain the observation that deuterated water slows down the gating.

How does water govern the conformations adopted by unfolded proteins? That question has gained urgency thanks to the discovery of intrinsically disordered proteins. One fact seems clear: the unfolded conformations are not arbitrary or ergodic. Reinhard Schweitzer-Stenner and colleagues at Drexel University have conducted circular dichroism and NMR studies of small peptides to get an insight into the thermodynamic factors involved, and particularly into the role of enthalpy-entropy compensation (S. E. Toal et al., J. Phys. Chem. B 118, 1309; 2014 – paper here). They find that this compensation is virtually perfect, in that there is a linear relationship between the ΔH and ΔS of solvation for glycine-terminated poly-proline, with the two cancelling exactly (ΔG=0) at about 295 K. In other words, while solvent reorganzation contributes to both the enthalpy and entropy of solvation in this (near-physiological) temperature range, it doesn’t really affect the conformational equilibria at all.

What is denaturation, anyway? Is it the same thing, regardless of how it occurs? Not according to Bruce Berne at Columbia and colleagues, who report simulations of ubiquitin which show that chemically-induced and force-induced (pulling) denaturation produce quite different states (G. Stirnemann et al., PNAS 111, 3413; 2014 – paper here). Denaturation promoted by urea produces a partly extended state with many non-native contacts, while force-unfolding creates a fully extended state with no contacts. That is perhaps what one might expect, but the full details of the conformational differences, such as differences in the dihedral angles, revealed here are not at all obvious.

Understanding the fibrous structure of cellulose in plant cell walls might be crucial to the efficient conversion of biomass to biofuels. Goundla Srinivas at Oak Ridge and colleagues say that an explicit solvent model might be needed to adequately model the transition between the crystalline and amorphous states of cellulose, and they present a coarse-grained approach for doing this (G. Srinivas et al., J. Phys. Chem. B 118, 3026; 2014 – paper here).

I have not previously come across the rhodopsin called channelrhodopsin, which differs from the light-driven ion-pump rhodopsins in that it enables passive cation conductance. How it does so is the subject of a paper by Hideki Kandori of Nagoya Institute of Technology and coworkers (S. Ito et al., JACS 136, 3475; 2014 – paper here). They say that, as with pumps such as bacteriorhodopsin, the conductance depends on a network of water molecules around the chromophore. Their FTIR spectra reveal that nine distinct water vibrational bands are implicated in the passage of cations, which they rationalize in terms of a network incorporating four bound waters around the Schiff base (shown below). 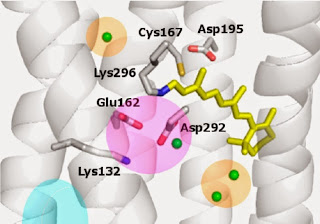 But it seems it’s not always so easy to figure out what internal water networks are up to. There is a water-filled pore threading through enzymes called family 48 cellulases, which exist primarily in bacteria and catalyse the hydrolysis of cellulose. Evidently that process consumes water, and it’s been thought that the pore might provide a channel for replenishing water at the active site. But this may not be the case, according to John Brady at Cornell and coworkers (M. Chen et al., J. Phys. Chem. B 118, 2306; 2014 – paper here). They have studied one of these enzymes, Cel48A from Thermobifida fusca, with both simulations and experimental site-directed mutagenesis, in particular looking at the effect of inserting hydrophobic groups into the pore region to disrupt the water channel. When this is done experimentally, the mutants don’t fold properly. And in the simulations, while hydrophobic residues can prevent water from filling the pore, it could find other ways of diffusing to the active site. So whether or not the water channel is functional remains unresolved.

Side view (left) and top view (middle) of the water pore structure in Cel48A, illustrating the division of the pore into rings 1, 2, 3, 4, and 5, coloured blue, red, green, orange, and yellow. On the right, only the five rings are illustrated as coloured van der Waals surfaces, along with the substrate chain.

How to quantify the hydrophobicity of protein residues is a long-standing question, and it is now clear that this depends on the structural context in which the residue finds itself. Amish Patel at U. Penn. and Shekhar Garde at Rensselaer Polytechnic Institute report a method for assigning a value of hydrophobicity that takes account of this context, based on the hydration free energy for cavity formation around the residue in question (J. Phys. Chem. B 118, 1564; 2014 – paper here). They report its use for the protein hydrophobin II, for which they provide a “hydrophobicity map” (here using a benzene-shaped “probe”, which explains the hexagonality of these images). The shape of the probe matters – a map using a small spherical probe looks slightly different from these ones.

A different approach to the same end is described by Jürgen Hubbuch at the Karlsruhe Institute of Technology and coworkers (S. Amrhein et al., J. Phys. Chem. B 118, 1707; 2014 – paper here). They too attempt to develop a hydrophobicity scale that takes account of the residue’s position on the protein surface, and compare it with experiments using UHPLC. Their approach also uses (presumably hydrophobic) probe or ‘tracer’ molecules that are sensitive to the topological constraints around a given residue, quantified by a modified radial distribution function.

Water self-diffusion in salt solutions is anomalous with respect to the pure bulk (e.g. J. S. Kim et al., J. Phys. Chem. B 116, 12007; 2012). Yun Ding at ETH and colleagues show that this can be explained using ab initio MD simulations, and that it does not need any notion of “structure-making/breaking” (PNAS 111, 3310; 2014 – paper here). The ions “do not disrupt the [water] network in any significant manner”, they say. Rather, the molecular explanation is subtle, involving dynamic and electronic heterogeneity of the water molecules on diffusional timescales. I can’t help thinking that there is a moral here about the sometimes dangerous allure of physically intuitive explanations – the fact seems to be that on occasion a simple picture is merely simplistic.

The ab initio study of the geometry of the hydrogen-bond network in liquid water by Thomas Kühne and Rustam Khalliullin at the University of Mainz, on which I reported some while back, has now been extended by these authors with a comparison to the network geometry in hexagonal ice (JACS 136, 3395; 2014 – paper here). The results essentially support the previous picture, namely that “the traditional description of liquid water is fundamentally correct [but] for a significant fraction of molecules the hydrogen-bonding environments are highly asymmetric with extremely weak and distorted bonds”.
Posted by Philip Ball at 3:57 AM 13 comments: