In praise of the Nobels

All the three recipients of this year’s Chemistry Nobel Prize – Martin Karplus, Arieh Warshel and Michael Levitt – have of course played some part in the general exploration of water’s roles in molecular biology. But Levitt in particular has been inspirational. It was what he wrote with Mark Gerstein in Scientific American in 1998 that, more than anything else, persuaded me there was a story to be unfolded about the importance of water in biology:
“When scientists publish models of biological molecules in journals, they usually draw their models in bright colors and place them against a plain, black background. We now know that the background in which these molecules exist – water – is just as important as they are.”

Much of the popular discussion of the Nobel award has centred around the technical computational aspects of these guys’ work, almost as though they deserve praise as programmers. But it is comments like this one that reveal the deep chemical insight behind all that computer stuff. This why I view the decision with deep satisfaction.
Posted by Philip Ball at 6:00 AM 4 comments:

Does water drive protein folding? That’s the title of a paper by Yutaka Maruyama and Yuichi Harano at Osaka University (Chem. Phys. Lett. 581, 85; 2013 – paper here), and as you’d expect from a title like that, they conclude that the answer is at least partly affirmative. They combine MD simulations and 3D-RISM solvation theory to calculate thermodynamic quantities involved in protein folding, and conclude that while hydration energy favours the denatured state (but is largely offset by the intramolecular interactions of the protein on folding), hydration entropy favours the folded state. In this sense, water contributes significantly to the stability of the collapsed conformation.

A perhaps more dramatic claim along these lines is made by Ariel Fernandez, now at the Argentinian Institute of Mathematics in Buenos Aires (J. Chem. Phys. 139, 085101; 2013 – paper here). He presents a model of electrostatic interactions between the protein surface and water dipoles, which suggests a principle that Ariel calls minimal episteric distortion: the protein-water interface adopts a configuration that minimizes the energetic cost of disrupting dipole interactions of the hydrogen-bonded matrix. In other words, the native fold is the one that corresponds to this minimally perturbing topology: the protein structure is the one that is least at odds with the structure of the surrounding water. As Ariel has put it, “The paper shows that the full interfacial free energy can be computed/interpreted in two different but equivalent ways: a) as elastic energy arising from the perturbation of the hydrogen-bond matrix of water, or b) as electrostatic energy stored in the anomalous polarization of water (interactions between dipoles forced not to behave in Debye manner and protein charges).” And crucially, if this interfacial free energy is omitted from the folding computations, an incorrect fold results because the structure is then “at odds with the solvent”.

John Weeks at the University of Maryland was one of the architects of the Lum-Chandler-Weeks hypothesis (J. Phys. Chem. B 103, 4570; 1999) that the hydration of small and large hydrophobes is qualitatively different, with a crossover scale of around 1 nm, and that the latter is dominated by interfacial free energies and the breaking of hydrogen bonds. (This was itself an extension of a proposal by Frank Stillinger in 1973.) Now Weeks, together with Richard Remsing at Maryland, has attempted to refine this idea by considering what roles van der Walls dispersion forces and electrostatic interactions might have in this business. Using MD simulations with the SPC/E water model, they confirm the original idea that solvation and association of small hydrophobes is dominated by hydrogen-bonding, but find that for large hydrophobes (where hydrogen bonds are broken at the interface) the attractions are dominated by Lennard-Jones dispersion forces, with water now behaving more like an ordinary liquid (J. Phys. Chem. B jp4053067 – paper here). The crossover length scale is set by the hydrogen-bond network itself, occurring when the solute is too large for this network to remain intact. This paper seems to offer an important extension of LCW/Stillinger, while showing that the basic ideas expressed in those earlier works are sound.

Further support for this picture comes from Guillaume Jeanmairet and colleagues at the École Normale Supérieure in Paris. They have recently presented a now molecular density-functional theory of water (J. Phys. Chem. Lett. 4, 619; 2013). In a preprint, they have now applied it to the hydration of hydrophobes of various sizes (G. Jeanmairet et al., arxiv.org/abs/1307.7237). They find that the original theory doesn’t work so well, in terms of predicting solvation free energies, when applied to large hydrophobes, but that supplementing it by introducing a hard-sphere component that reproduces the van der Waals picture of liquid-vapour coexistence in bulk rescues the model. This seems to be, they say, very much in line with the Lum-Chandler-Weeks picture of a crossover between “volume-driven” hydrophobic hydration at small scales and a surface-driven picture, dominated by interfacial free energies, at larger scales.

Rahul Sarma and Sandip Paul of the Indian Institute of Technology in Guwahati Assam have been rather extensively investigating the origins of osmolyte effects on protein stability using MD simulations. In their latest paper (J. Phys. Chem. B 117, 9056; 2013 – paper here) they look at the stabilizing effect of trimethylamine-N-oxide (TMAO) against the pressure-denaturation of proteins. They find that TMAO enhances the hydration number of a coiled peptide more than its extended state under pressure, whereas the opposite is seen in its absence. Partly this is an indirect effect: solvation of TMAO reduces the ‘crowding’ of water molecules at high pressure that drives them towards the relative freedom they find in the hydration shell of the extended peptide. There is also a direct effect due to the relative inefficiency with which TMAO interacts with the unfolded peptide.

Alkaline phosphatase enzymes are able to catalyse the hydrolysis of a range of different phosphate and sulphate substrates. What accounts for this promiscuity? Through first-principles simulations, Guanhua Hou and Qiang Cui at the University of Wisconsin-Madison show that this class of enzymes can support different types of transition state in the same active site (JACS 135, 10457; 2013 - paper here). The differential placement of water molecules in the active sites is implicated in some of this, although the details are complicated and apparently as yet case-specific: there is no general picture emerging yet of how these and other enzymes engineer their promiscuity.

Another water molecule playing a functional role in enzyme catalysis is identified by Walter Thiel and colleagues at the MPI für Kohlenforschung in Mülheim (B. Karasulu et al., JACS 135, 13400; 2013 – paper here). They look at the three-molecule water bridge that exists in the active site of a lysine-specific demethylase (which is involved in demethylation of histones), showing how it is stabilized by interactions with the surrounding residues and how it assists proton transfer. 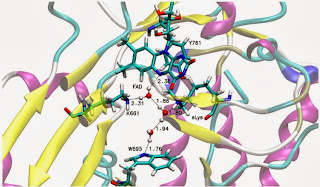 Electrowetting – switching surfaces between hydrophobicity and hydrophilicity with electric fields – has useful applications in microfluidics and ink-jet printing, and might enable voltage-gating of flow through nanochannels. This provides the motivation for a study by Alenka Luzar at Virginia Commonwealth University and her colleagues of the effect of electric fields on water dynamics at the interfaces of a slit-like nanopore (M. von Domaros et al., J. Phys. Chem. C 117, 4561; 2013 – paper here). They recognize that the application of a field across the pore breaks the symmetry so that the water dipoles tend to be aligned in opposite directions with respect to the surfaces at each interface – this becomes, they say, the electrical equivalent of a chemical Janus interface. Their simulations indicate that the water density in the first hydration layer is lower for the “incoming” than for the “outgoing” field, and that the response times for orientational dynamics can be up to two orders of magnitude different (in the picosecond regime) – an effect that ought to be visible to, for example, dielectric spectroscopy.

Pavel Jungwirth, Damien Laage and their colleagues have looked at how hydrated ions affect water dynamics (G. Stirnemann et al., JACS 135, 11824; 2013 – paper here). Their simulations indicate that in dilute solution, effects on water reorientational dynamics are short-ranged and ion-specific: both retardation and acceleration may be seen, depending on the interaction strengths. But in concentrated solution, where hydration shells overlap, the effect is always a retardation and is not ion-specific. They suggest that this might explain the apparent discrepancy between the studies of water dynamics by NMR (at low salt concentration) and by infrared and THz spectroscopy (e.g. Huib Bakker), which must use high salt concentrations.

Niharendu Choudhury and colleagues at the Bhabha Atomic Research Centre in Mumbai offer a new view of the local solvation environment in pure water (J. Phys. Chem. B 117, 8831; 2013 – paper here). They say that, by considering the hydration shell of each molecule to be composed only of other waters hydrogen-bonded to it, they can explain the density anomaly without recourse to polyamorphism of the liquid state. I confess that I’ll need to digest this paper more to see where it really diverges from previous treatments; in essence it seems to posit three order parameters, namely a tetrahedral order parameter in the first hydration shell, an orientational order parameter in the second shell, and the number of hydrogen bonds. I think the point is that the first two can be subsumed in the third, and that distortions to the tetrahedral coordination arise at higher temperatures from the incursion of non-hydrogen-bonded molecules into the first shell. The resulting analysis restores a picture of water structure in terms of fluctuations in a homogeneous fluid, rather than requiring the kind of heterogeneities posited by Anders Nilsson.

Ali Hassanali at ETH and coworkers have uncovered what seems to be an extraordinary complexity and subtlety in motion of protons through water (A. Hassanali et al., PNAS 110, 13723; 2013 – paper here). (See also commentary by Edelsys Codorniu-Hernández and Peter Kusalik of the University of Calgary here.) Their first-principles simulations show that there is a great deal more to it than Grotthuss hopping. For a start, the process is very heterogeneous in time: both proton and hydroxide diffusion happen in bursts of activity followed by periods of quiescence. These motions involve medium-range correlations between the movements of many protons, which the authors characterize in terms of the connected-ring structure of the hydrogen-bonded network. The result is that protons can jump over a wide range of length scales, and not merely hope from one molecule to the next. The authors point out that “the fundamental aspects raised in this re- port are likely to open up new directions in the role of the water network in phenomena associated with the hydration of ions and macromolecules such as proteins and DNA.”

Making water modelling easier: Vijay Pande at Stanford and colleagues have simplified the AMOEBA polarisable model of water to a version they call inexpensive or iAMOEBA, which introduces a direct polarization approximation that removes the need to calculate polarization iteratively (L.-P. Wang et al., J. Phys. Chem. B 117, 9956; 2013 – paper here). Any shortfall in the polarization energy introduced by the approximation can be recovered by parametrization, so that the model accurately reproduces the water/ice phase diagram, dielectric properties and so forth.
Posted by Philip Ball at 1:40 AM 3 comments: